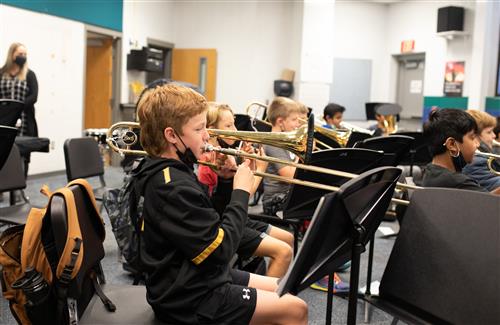 Listen to the podcast

Blue Valley Northwest senior Rory Duncan hasn’t grown up in a musically-inclined family. Yet most of her middle school and high school experiences have been rooted in music.

Duncan first joined strings in fourth grade and started learning to play the cello. She has continued to be a member of orchestra which has opened up many doors for her within and outside of school.

The band and orchestra branches are just two groups where kids can find a home.

That rings true for students like Duncan, Quinn Morrow, Adrian Oh and Gavin Gordon who have found a place to belong.

“It creates a community for kids where they can belong and it’s an expressive space,” Gamble said. “It’s one of the few times we talk about emotions almost daily, where students can be in a safe space, they can perform something with emotion and feel like they worked together with an entire group to create that emotion.” 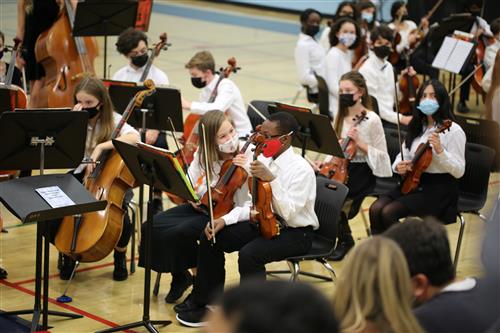 Students beginning band or strings next year were given the opportunity this school year to try their hand at various instruments to determine the best match.

Gamble said it’s a day in which students learn and try out band, woodwind and brass mouthpieces and hear how the instruments sound.

For many students, those beginning days of strings and band will be remembered for years.

Adrian Oh, a 5th grader at Harmony Elementary, was drawn to orchestra when he sat in on an orchestra demonstration.

“They played songs from ‘Star Wars’ and ‘Harry Potter’ so it instantly got my attention,” Oh said.

Oh chose the viola at his cousin’s recommendation.

Morrow, an 8th grader at Pleasant Ridge Middle School, joined band in the 6th grade after seeing his brother in marching band.

Students entering band and orchestra start with the basics, from learning how to open their instrument case to how to make a sound on a mouthpiece.

“Because we all start from the same playing field in 6th grade, every day builds upon each day and then we are able to play really cool, fun stuff that is challenging, intricate and multi-part,” Gamble said.

“I get to see my 5th graders every single day,” Arbucci said. “It means they retain what we do from day to day really well.”

The students are learning to create a product that takes years to develop, instilling grit.

“Performing arts is a vertical program,” Arbucci said. “The kids build on skills from one year to the next and they are able to accomplish more.” 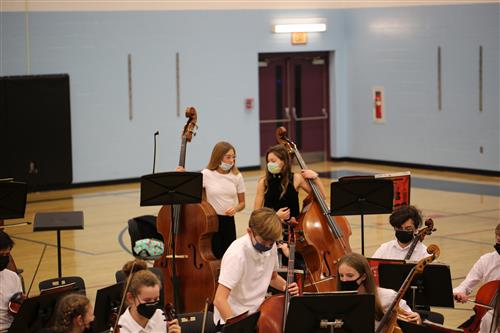 Finding a home within bands and strings

The fun and enriching moments students have while participating in performing arts are endless and add to the middle school and high school experiences.

Oh said his first practice concert at Harmony Elementary was a special moment for him.

“It was my first concert so it was really nerve-wracking but it was also really exciting,” Oh said. “It was a great experience that I had.”

Oh said joining strings has enhanced his approach to 5th grade. He has learned the importance of teamwork and listening to others.

Gordon’s favorite moments since joining beginning band have been performing in concerts, making new friends and learning how to be a proper musician.

Morrow, who plays percussion instruments with his favorite being the snare drum, said he enjoyed 8th grade band night when he got to play with the high school band.

Assemblies and concerts are fun for Morrow as he enjoys the sense of community with other music groups.

“I have gained a bunch of friends throughout my band experience and they’re always very welcoming,” Morrow said. “When I went to watch the marching band play during competitions, even the older kids who I’d recently met let me hang out with them and were excited to see me.”

Duncan has had the opportunity to travel to Branson, Mo. for competitions, participated in the solo and ensemble festival and auditioned and joined in 7th grade the Kansas City Youth Symphony.

High school orchestra opened even more doors for Duncan. She was one of many students who traveled as a freshman to Germany and Switzerland for a performance tour.

“Pretty much every week there’s some sort of quartet or some competition that’s going on that weekend,” Duncan said. “You pretty much get your pick of the lot of what you want to devote your time to whether that be auditioning for orchestras or performing solos.”

Duncan has committed so much time to orchestra that the program has morphed into her high school experience.

“I am in four music classes and I only have six classes,” Duncan said. “That’s the great thing about high school. If you find what you love, you can make it your day.”

The doors orchestra has opened for Duncan will extend beyond high school. Duncan is interested in becoming a music therapist and is already on that path.

Arbucci has provided Duncan with opportunities to begin pursuing a career in music therapy. She served as Arbucci’s teaching assistant her sophomore year and had the chance to teach music to younger students.

As a senior, she serves as a cello sectional coach for the freshman concert orchestra while also being enrolled in Blue Valley Northwest’s Chamber Symphony.

Not only has orchestra led Duncan to develop a love for music but she has found a potential career path and a place to belong.

“Pretty much all of my closest friends are from orchestra,” Duncan said. “Kids you would never expect to be friends with will end up being the people you make lifelong connections with and teachers will be there for you.